updating later Wed... I posted to Blab for feedback in the "What do you really think forum": http://www.modelhorseblab.com/forums/showthread.php?t=84502

And now here's her new and improved stance: 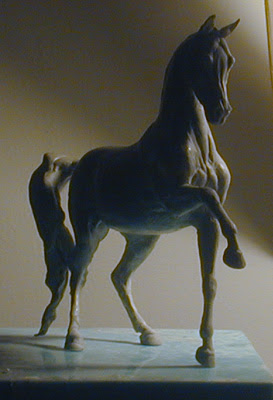 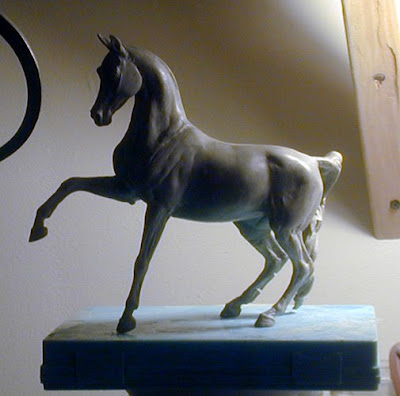 I love new refs and for some reason despite looking through Gabriele Boiselle's searchable directory & all 1000++ arabs.. I hadn't seen a few of those album's pics. A couple REALLY helped me this morning to resolve a few things that were driving me nuts.

The shoulder... too short.. too juvenile for a 3yo. And the neck.. too gazelle like, too thin even for a mare except of the most extreme type which isn't what I was going for. :D 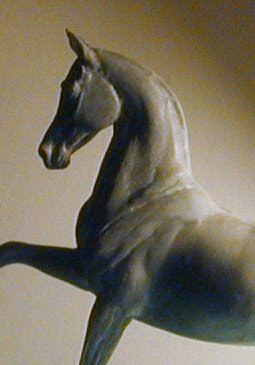 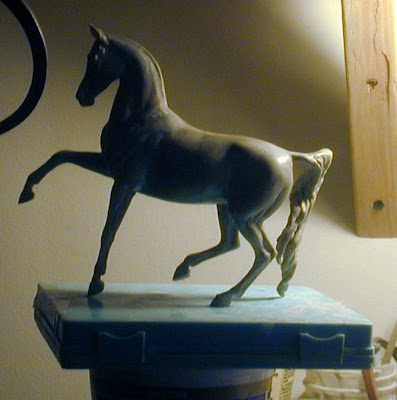 During lunch I parked my two cold cast bronze traditionals next to her to give an idea of scale.. and I played with the mane here too: 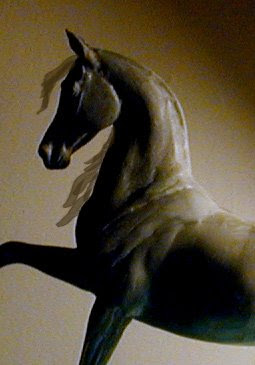 Posted by Morgen at 8:16 AM No comments:

Much refining now to get type (and more pic refs) :) 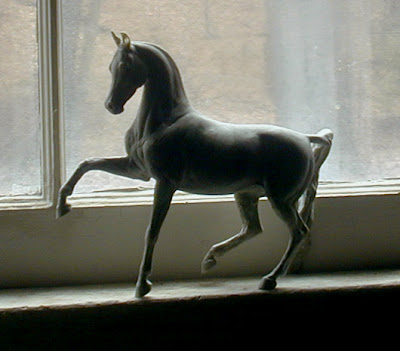 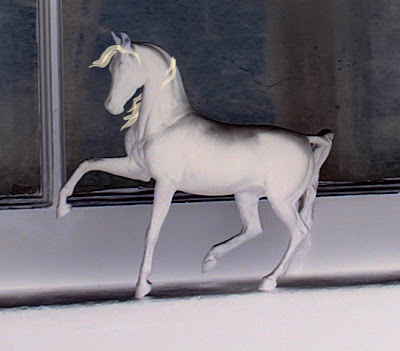 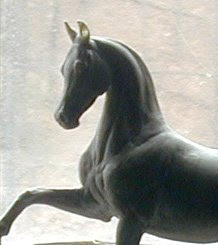 I am liking this particular type of Arab head personally. There are SOOOOOOOO MANY types of arab heads really. It's very hard to choose what's young & feminine, yet says "arab".. and there are a lot of types I don't find so appealing. Even just nostril flares (where I'm at now - how much to flare.. I kinda like the more vertical flare personally).

Here's some fun pics now. I've been literally looking through thousands as I sit down every time over here. :D


First let me say how incongruous I find this photo to be:
http://public.fotki.com/hypoint/arabians/arabian_album_egypt/madkour3.html
Doesn't he look like he should be holding a lead to his favorite sheep dog? (whom I'd expect to be sitting looking at him loyally)... not a striking out stallion? lol!

And here those came from this;
http://public.fotki.com/hypoint/arabians/arabian_album_egypt/
A billion and one egyptian arabians to admire :D

That's all for now... while this mare hardens (Apoxie Sculpt) I need to get back to my medicine hat fellow. ;)

********
Opps! Forgot to record for posterity a bunch of others I’d been looking at… 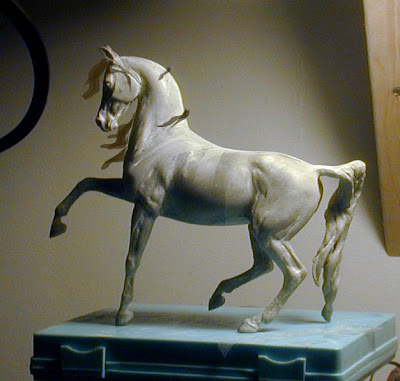 Well I'm into the "shop before you chop" phase now... where I'm taking photos in the studio and comparing them to horses online. It's almost never a perfect science and it's actually BAD to do overlays unless you have perfect angles of both horses matched up (all points - xyz coordinates - there is room for distortion each end ->from the top, bottom, front to back - iow perspective is a tricky thing and it's not great to rely solely on this).

Anyhow, I'm finding myself surprised how much shoulder arab mares over the age of 4 years old have. Shoulder and hip depth! I plan to try to shoot for 3-4yo here however, a young fiesty mare. She's sorta leaping off to the left (leaping/dancing you get the picture eh?).

Annnnnnnnnnd since I gotta run back to the therapy job now for afternoon feeding here's a few more links to enjoy. :D 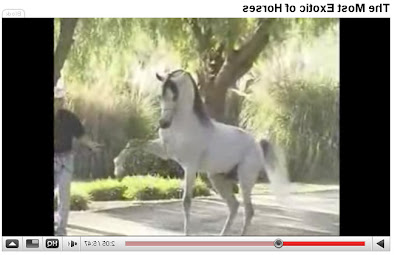 check out that CRAZY pose eh?
(from http://www.deshazer.com/ARAB/laheeb.html )

Some other fun helpful pics I found...

But those aren't just limited to stallions... check out THIS mare...! (8-o
And a whole list of fun to admire elite mares:

And more that I wanted to save somewhere (here works!) :)

Well I'm going to post the text of that ad here because MH$P has been wildly fickle... :( aaaaand I'm also gonna put the BIG photo here since I went through the trouble of making it.. :) 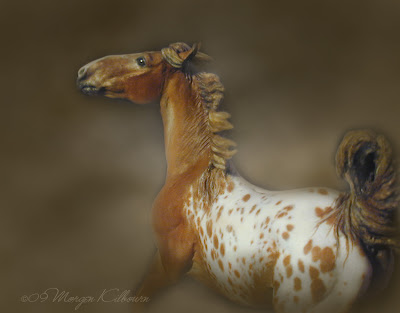 Taking offers starting at $300 Please read the terms below

Timepayments – yes, I will accept these. Time payments up to 6 months accepted as part of the offers.

Trades – believe it or not, yes, I will also accept these (for unpainted resins ONLY) & for no more than HALF the value. Trade item value must be determined and accepted by both parties. I am only interested in this in order to have interesting resins I might not otherwise be able to aquire… unfortunately I’m really picky about what I acquire (I have quite a few you can imagine eh?) :) so there is NO PROMISE that I’m interested in any particular resin for trade, but try me! :)

Bidder anonymity – bidders will be assigned initials and if you wish to remain anonymous in display here these can be random letters. BE AWARE however for the sake of honest disclosure that the winning bidder will receive the real names of the under bidders involved

Media – painted primarily in oils and finished with some acrylic details. Rio comes with a base that I’m happy to customize further at the winner’s request.

About the resin – Vixen is a quite popular sassy tiny little gal with wonderful details. She's a stablemate scale mustang mare & I was lucky to get on in the few minutes they were available (I believe the edition is now sold out). Sculpted with all the detail, character and style that Sarah Minkiewicz-Breunig is known for!

About me – It’s been over a year now since I’ve offered up any painted horses for sale.. but I'm both a sculptor and painter and I honestly can't remember how long I've been in the hobby but I've been selling now for just under or around a decade I suppose (time flies and I try hard not to dwell on that!). :) A little more about my hobby painted horse sales can be found on my sales page. By way of a resume of work quality, a gallery of winners sculpted and a # of ones intersperse that were painted by me (winning) can be seen here. Also I have a blog post of this year's NAN winners (a few painted by me as well) here. Closer images of some of those can be seen under my "artist's proofs" block on this page. My commission policy and image use policies are here.

Please don't hesitate to ask any questions (morgen @ one-horse.net) or point out that I've made a major faux pas here! I certainly am out of practice and haven't offered up the trade option before so I'e never done sales this way. Thanks for your patience and thanks for looking!!!

Posted by Morgen at 1:53 PM No comments:

Painted horses I'm wrapping up too... 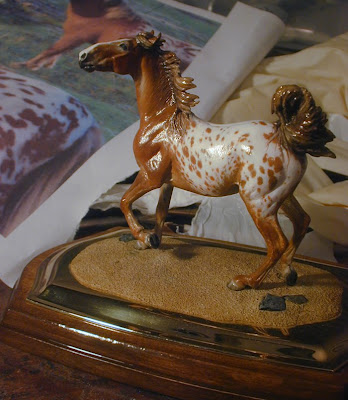 ***********************************************************
Back in Oct I had to make a decision as to investing the time on bitty bosco or many of these, so I chose to focus on bitty. That was when I'd decided he needed individually blended hair ropes so yeah... that took a month. Then it was one thing after another and staying on top of orders. Finally I returned to playing with these guys last month. This past Wed I was able to spend the day at Liesl Dalpe's studio and I airbrushed a base coat (that's all there is on those two) on a Kara Kush and a traditional Bosco. I'm in love with her hand mixed acrylics!! I was able to just keep going with no stopping and no disassembling/interior cleaning of the airbrush (how novel eh?!). I have a few others painting things going on for people but these are the ones that are going to be for sale. Annnnnd it's been over a year I believe since I've offered up any painted horses for sale... it'll be fun to do these as a group.

I'll put these down in the order I rather expect they'll be done in over the coming weeks... 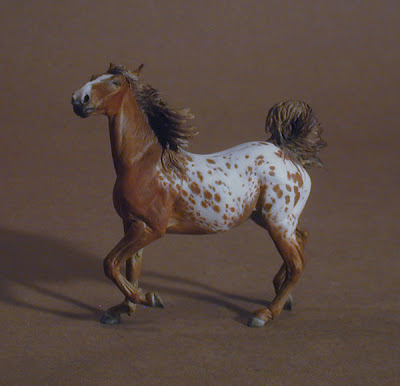 Vixen: stablemate Mustang Mare by Sarah Minkiewicz-Breunig, I have a special wood base my boyfriend cut out for me like Spinny's (below) for this gal.. its square and darker. I'm thinking it needs to be given sand & a couple of rocks too. This afternoon's project along with her details. If her hoof/eye and mane/tail details go well she might be up for sale as early as Monday... we shall see! 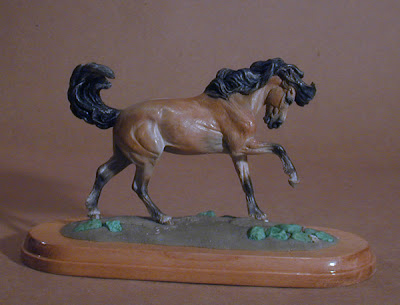 Spinnaker: stablemate stallion by Sarah Minkiewicz-Breunig on another custom base carved out my my guy & stained/polyurethaned by me. I'm thinking he needs to be on grass & those rocks need to be lichen covered. Greens & grays to bring out his browns & whites. :) 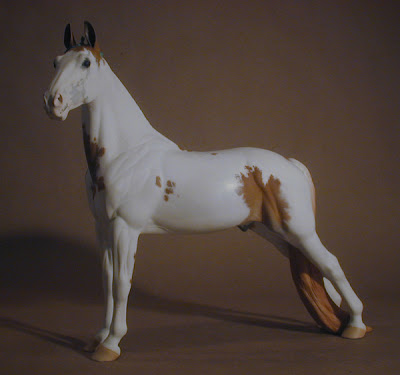 In chestnut tobiano on right: Micro Mini Friesian - Maggie Bennett for EquinArt Creations (who's going for the Vanner look).. 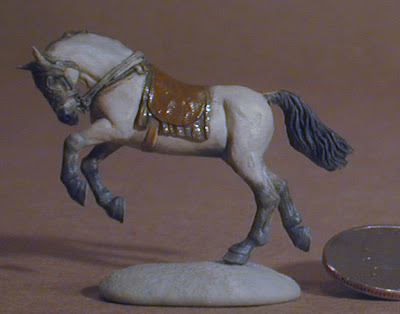 Close up of the left horse there: that's something I picked up at a hobby store & I'll have to find the packaging but it's from a war figurine set... aint it cute?! If you enlarge you can see the bit details. 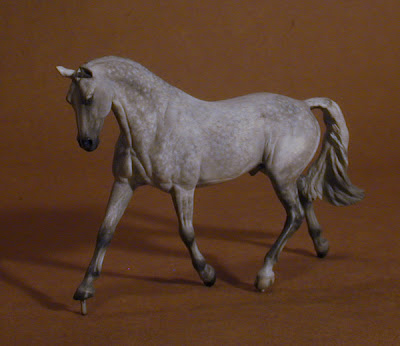 The dinky duke little bit sized resin of mine that was going to be more fleabitten than dappled is going to be more dappled than fleabitten. I didn't like how that was coming out. You really couldn't see the fleabites in most light and I'd have needed a smoother sealant layer to reemphasize them better without having the bites be grainy... I'll have to try again for a smoother fleabitten one. I'm diggin him in these dapples tho! 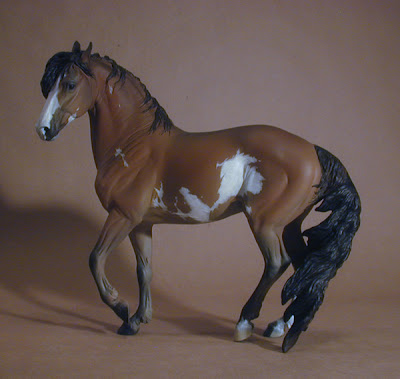 The traditional sized El Embsoco that I started on Wed at Liesl Dalpe's studio. That's just airbrushing - oils come next! I wanted to basically give him the same primative bay body color (perhaps a tad more sandy in tone) as my Hazel demo model that's been touring the country... 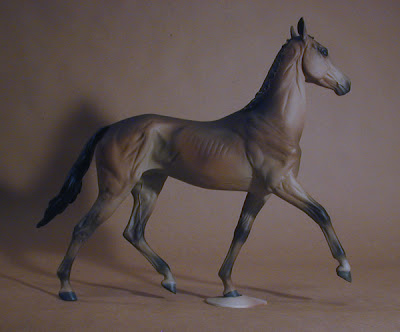 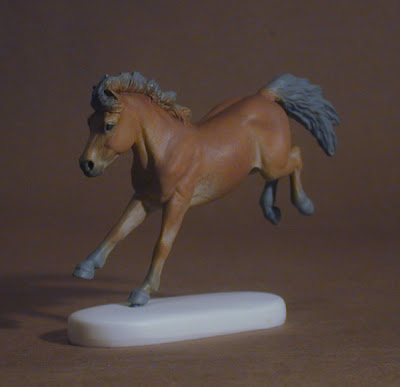 And lastly, this Flitwick (sculpted by me) is having issues with being waaay more orange than I'd wanted as the layers built up. I keep giggling and wanting him to be called Orange Julius. In the end though the orange will add depth to the beige and browns I'll add on top and I hope it will be a nice effect. I was really enjoying the thin skin dapple effect he was getting. I was thinking he'd look neat as one of those silver chestnuts colors that have some black (manifested more as grey) to the mane/tail.

So wow eh? I haven't offered up anything for a year and suddenly I go and plan to wrap all these in progress horses up. I have a few more in progress too but these were the ones I'm focusing on. With oils it requires sometimes just a few minutes and then putting the horse down for days and days (I loath/fear and don't like the drying additives so I use patience instead - lol! Sometimes just TOO much). Anyhow, well wish me luck!
Posted by Morgen at 4:58 AM 4 comments: