Ok - some pictures of plants and tack!

Well it’s 90 degrees in the studio (only 80 outside) with 40% humidity (which fortunately is ‘dry’ - it would stink if it was also more humid inside than outside!!)… the air conditioner is at the ready in the window and sadly in the next few days I’ll have to make use of it I think.. Blech. I've tried to stay on top of studio humidity, even if the AC is set at 78 or higher it sometimes goes on just to help with humidity.. stay tuned for when July arrives and that's not working out so well for me and painting becomes a 'winter only' activity! ha!

BUT on a bright note about the (gorgeous outside at least) weather – here are some flowers (pictures at last!) that seem to be coming along quite well (not dying yet in other words). :)

That's just a few but my friends up north were asking about em! :)

Up next tonight is the first of the veggies into the garden my man tilled. They've been soaking now in those 'green' pots what become fertilizer when put in (well you know what that means they're made of - cow patty pots I've heard one company calls em).. Anyhow, he went all around and created “pine straw” mulch beds to prevent weed growth. He tore out all old weeds, then laid down that black stuff (weed block sheets) ;) then neatly spread out pine straw. This is something they sell down here for 4.50 a bale. OR, you can walk anywhere and risk the bugs and have to sift a little harder and get it for free. He chose free.. but there are leaves here and there in it, easy enough to pick out when I lean over and pretend to be doing something with all these poor plants other than over or under watering them. ;) The dirt is really great right here though, the land was forest not too long ago and was cleared – the soil (well for a foot down) is nice and dark black rich stuff. Typically soil is wicked sandy around here. The irony of the fact that I’ve been making money off of moving horse manure for years and years now and suddenly have none to spread on my plants isn’t lost on me. Will have to make friends with someone who’d wouldn’t mind a little removal (I’m sure most wouldn’t mind but sadly not much more than a bucket is needed).. but at least there are many horses all around…

Speaking of – All the plastic (resin) horses are now unpacked and in their proper homes and I didn’t spy a single damaged item -> WHEW!

Was able to meet my new mail carrier today too. I’ve never done USPS pick ups (or UPS for that matter) but it’s really going to be necessary here. She didn’t bat an eye when I asked about it and said I might have up to say 7 medium sized packages sometimes (more would probably be worth a trip to the PO of course). She only has a smallish Jeep - we have at least the pickup bed we could put more into.. Anyhow, she’s quite friendly too – yay!

I met her because we needed to sign for this package; 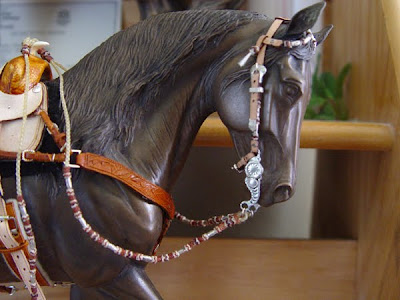 Oh, and on that note – I’m sure most of you know this but at higher temps I’ve just experienced the joy of sticky wax turning to smeary wax.. ha! And that Godiva is my personal 'cold cast' bronze for my own 'archive'. For once I'm able to display these here (and with tack, why not!) - not just occasionally at shows! :)

Ok, well it’s cooling down outside and I have to move around some more dirt now and transplant (torture) some more plants... Tomorrow might very well find me sculpting however – Yyyyyyyaaaaaaaaayyy!!!

PS to this - I forgot to mention that I'm pretty used to my place being a LOT hotter inside than outside.. my last place tended towards 10-15degrees hotter inside than outside in the sun. I had businesses below me that would put on their AC pretty strongly, and the AC units outside were below my windows, so on hot days the heat would be pushed up into my place. So being 5-10 degrees hotter than outside isn't so new at least. MAN would I love to have a half-ground submerged home or a nice brick one! Course then I suppose mold is an issue more? It's all a trade off. At least I'm familiar with this one AND now I have the option of working outside in the shade too. ;)
Posted by Morgen at 3:08 PM 2 comments:

Back online fully now I think - just some rambles :)

Well I am caught up on emails and communications now! :D

"High Speed" (satellite) internet was installed yesterday afternoon. I have made a quick attempt to upload a very large sized image (1.5MB) just to see if I could and it went in a very reasonable amount of time - yyaaaayyy!!! :D Installation yesterday was also done under cloudy skies with periodic drizzle and nary a hestitation there.. if I have to wait for the internet through a downpour now and then, well so be it I guess. I'll just try to be careful in how I do new sales so that I don't go offline due to weather or surpassing my daily allowed bandwidth (which is generous enough to be servicable).

I won't be looking at youtube funnies much anymore though I can tell ya! :D And on a more relavent to art note -sighs- I probably won't be surfing as hard for photos and videos either of horse colors or horse movements. As so many of my past posts have shown, I like to bookmark the largest and highest resolution versions of these but I'll need to be more selective and careful in my surfing now (there is a freeforall download period in the wee hours of the morning at least - and a file manager to set it automatically, but that doesn't work when you are looking for photos that say, show a horse's forelimb from a certain angle all crunched up tight in super high resolution.. so maybe I shall become either a really early riser or a very late night owl!). At any rate, it's a really good thing I insisted on keeping every scrap of reference material through all of this... there are several hundred pounds of horse literature stuffed in here with me! ;)

I'd love to upload some pictures here that were taken on my camera phone since I've gotten here but it'll be a bit before I can - I need to find my adapter card! Doh!! (packed carefullly - don't you love it when you pack something away carefully never to see it again?? Man I hope not!). The card these pics are on is made for a phone and is the size of my pinky nail (and holds insane amounts of pictures/videos/whatever).. only problem is that it's too tiny for my computer's slots - in fact it's like a contact lens, you don't want to drop it on the ground or you'll never find the dang thing again!;) Anyhow, I would just upload from my phone of course butas I said, no service. My new plan won't include internet probably... that's next week's project! :)

Well with that, I'll just post a pic I'd taken on a previous trip down, but we passed by again today soooo (is that cheating? lol! I just love these!). Again, it's been wonderful so far - but tons to do. Today for instance we shopped around for appliances (and a few other essentials) and bought a fridge and a stove... now to get them installed. Every day a new big project it seems. I think tonight I might now get to unpacking some studio essentials as I'm absolutely chomping at the bit to get back into things!

I hope all is well out there, I have barely peeked around at what's going on with everyone else (miss that) :( At least now I think I have replied to everyone's email now so if you haven't heard back from me, well give me a hollar again at both emails to be sure.. artbymorgen@yahoo.com and morgen@one-horse.net
Posted by Morgen at 4:19 PM 1 comment:

Typing this here to blogger since it will post 2x for me... We made the move to NC fine but barely stay connected for more than a minute. Requires a lot of patience to get even into yahoo email & I haven't been able to access my one-horse.net accts at all. Needed to let folks know in case someone is wondering- it's been 5days for that one. Typing on cell here in yard - old school cell like morse code(123stop pause 12stop). Good news installation Wed!
Posted by Morgen at 5:51 AM No comments: