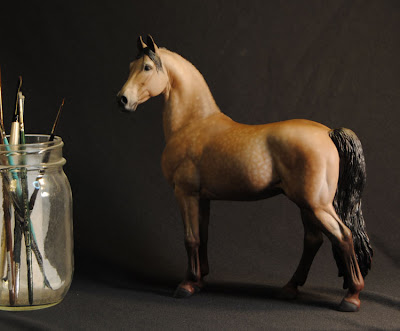 I really have nothing exciting to report here. I've gotten more Mold Star 15 today, some wax/clay sculpting tools (Amazon - $14! woot!)... There's a few very tiny things I'd like to try to cast (in non-resin/non-hobby type mediums like Hydrocal & Permastone). The Halloween head bust from a previous post (on Oct 31 I believe) will eventually be the largest I try out these things with, it all gets a bit expensive - most things are quarter sized...

I've gotten my first proof of Johann - a "proof"is where I "approve" of the casting (and I tend to keep a few copies, 'artist proofs' for myself for archiving unpainted, or painting/selling later, from each edition - generally I've heard these called "artist proofs" but typically only the first ones off the line in other industries like graphic arts are called "proofs" as far as I know..?).. ANYHOW, the casters only managed to get 2 castings done before the last two weeks of the year where they shut down the facility, but I was inspired to play with paint rather than, I dunno, be drinking isn't it on New Years eve? :) 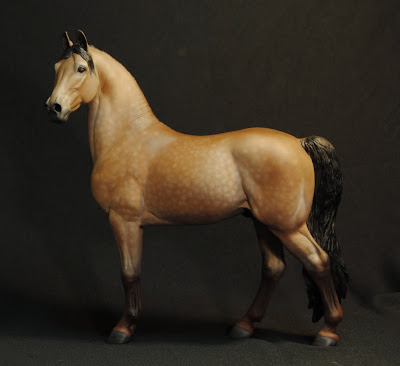 This buckskin guy is my own copy for display purposes. Which is kind of funny because I don't know where/when/what I'll be attending at all this year to display anything. So far my hobby year is utterly blank. MH$P sales pictures I suppose.. if I ever get him done - red legs kiiiiiinda not so convincing as buckskin! Still, even if I never get around to really wrapping him up, I just couldn't resist trying out this color on him. It's honestly a bit refreshing not having to worry about it being for sale, I can't explain it.

Anyhow, I have emails I've let slip for a full day. Sorry gang! And this is why I don't dare write babble online on any forum too often... I'm always behind on the things I"m supposed to be doing.... so off to it!
Posted by Morgen at 1:06 PM No comments: