I believe his profile will be a tad straighter than this even but he's starting to get a little personality! 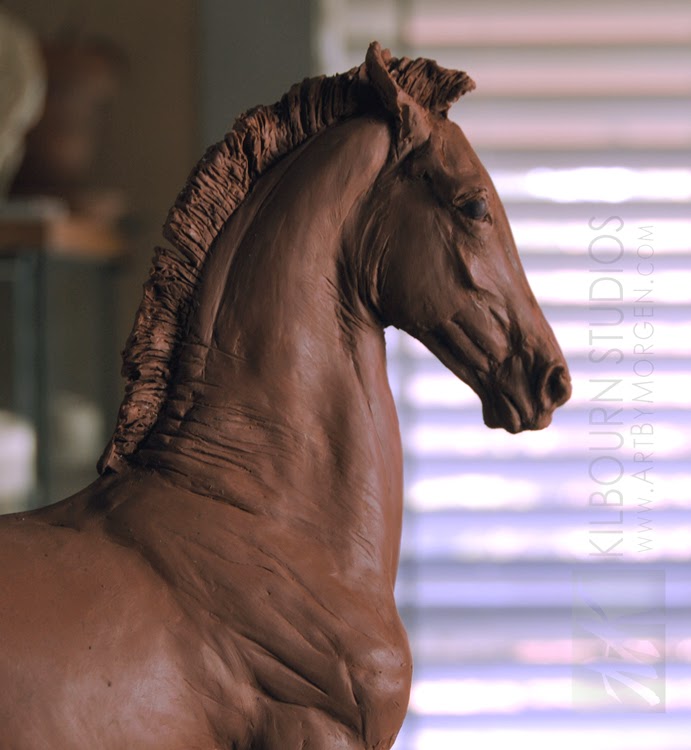 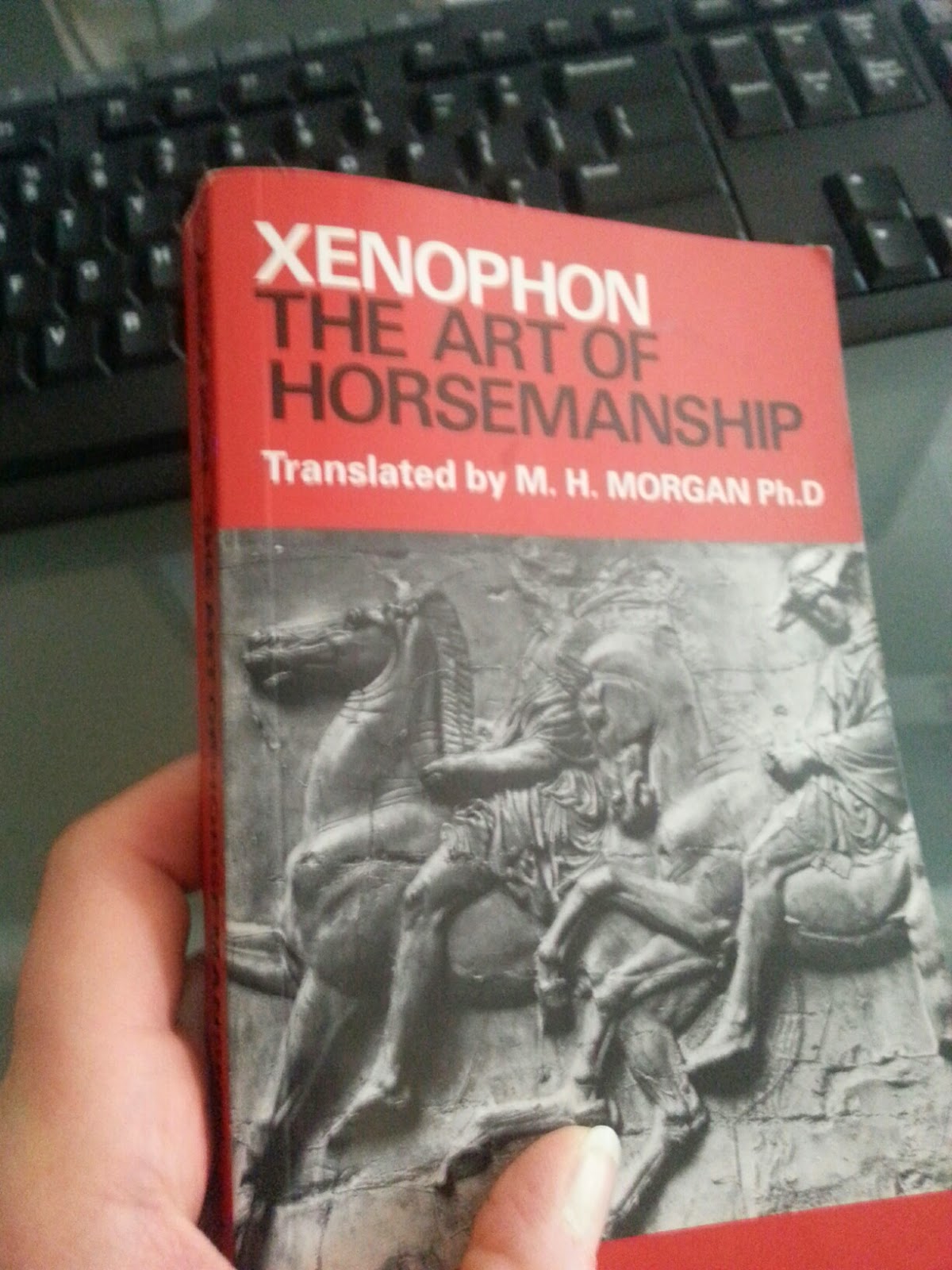 So I highly recommend anyone interested in ancient breeds read Xenophon on The Art of Horsemanship with Translation and Interpretations by M.H. Morgan...What a great resource on the riding horse in antiquity!  Very nearly half the book is filled with scholars interpretations of "The Greek Riding Horse".  I wanted to pull some quotes but it's been a week or so since I read through it & I didn't take notes.. suffice to say for now that I was all over the place on my "strongly agree" vs "strongly disagree" spectrum on reading it.  However it's fascinating to hear the extent to which various points like size & roundness of gaskins are compared.
Frankly I personally feel that just like "riding horses" of today, they probably had horses breed for running, horses breed for war (so they'd be doing more collected work..).. etc.  There apparently is plenty of evidence that they bred for harness work (chariot) differently .  So I will carry on with my pursuit here towards the ideal proud (pageantry) riding horses of antiquity presented in a myriad of ways over a few millenia on coins most especially.  This, in my opinion, being a riding horse of a lighter nature with a rather flat yet hammer head type shaped head as opposed to the later Roman noses or the early proto-Arab that was emerging at that time too.  Also a fairly young horse of 6-9years old.  Horses get much heavier looking as they age, if you haven't seen this I suggest looking at racing Thoroughbreds aged 6-7 verses how they look in their teens and twenties.

So at any rate, here is where I got with my sculpt before I decided I actually needed to rework his neck pose further (below).  The more ancient art I studied, the more I saw this trend of horses heads being thrown or pulled back just a bit more in a fairly defiant and excitable pose.  Here we see a rider on this coin probably using a heavy hand  to get this reaction but you also see it with fiesty horses without humans influencing them!  High headedness was definitely a trait the leaders and warriors of a bygone era really seemed to prize. 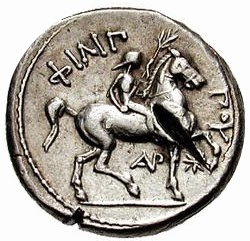 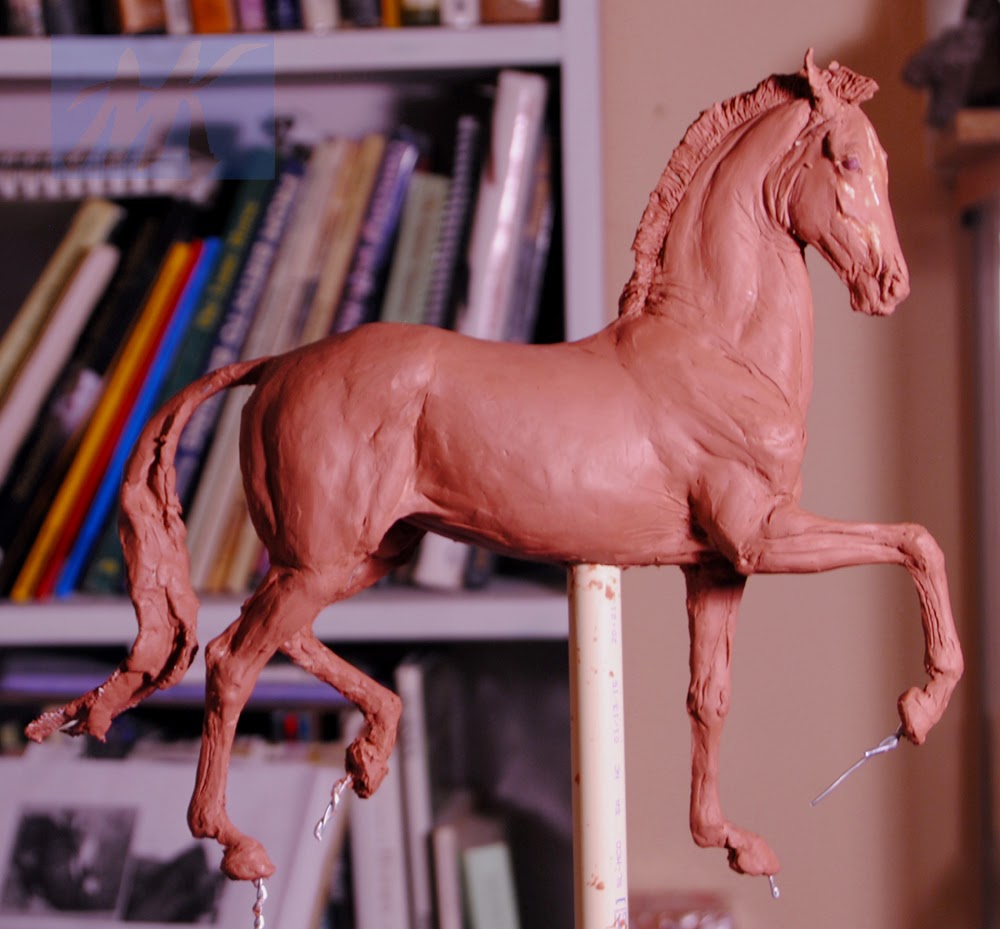 So here he is getting his neck adjusted from T1 down. ;) 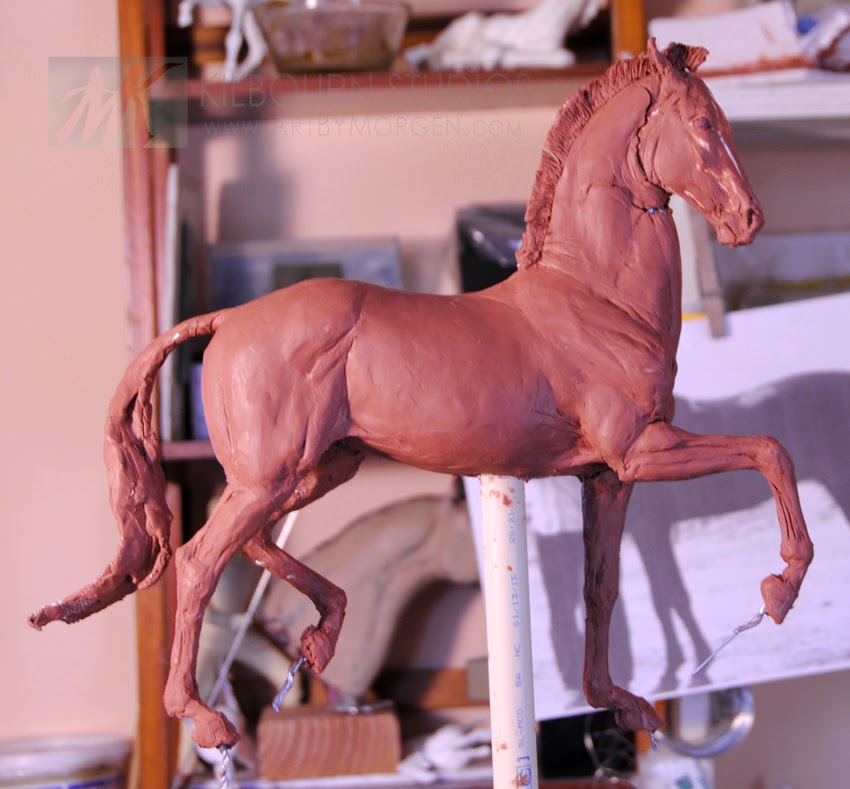 Much was done after that here so I made a quick comparison so you can see some changes more easily... the red & green lines below for example are the same color and angle from the left pic to the right picture... looking to where they start & end you can see where I've added some angles in an effort to get more tension as befits a war steed.

There are things I'm not liking much too at this point..  the neck;  I've thinned & thickened it .. oscillating back and forth about this.  Some works show huge exaggerations here & I'm not aiming for cartoonish... yet I believe that if a trait was emphasized in ancient art it, like a caricature, was something that stood out.  It's about looking at the context of the art as well to see how much & of what nature are the exaggerations occurring. 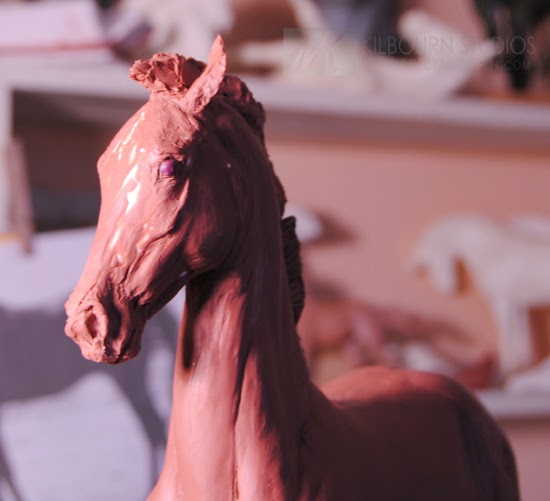 I have more waxing philosophical on this matter but less time right now & I'd much rather pull out some excerpts and art again to discuss.  Meanwhile, the headshots here shows something else I've been dancing around.  I posted this to FB today about the white skull showing through:  True confession: I've only done the skull method for whole horses using my Sculpey or apoxie sculpt close-to-the-clay-colored skulls outside of classroom practice & busts. I'm not liking white as a background color for getting details on & finishing this. It's one thing to smear apoxie sculpt across white resin or foam (especially in the larger 1:6 scale busts that works ok).. but this 1:9 white resin to red clay contrast is too distracting to me. I may peel off the clay & paint the white resin a similar color. Normally with sculpy I wouldn't do that - it can't be baked then! But I can here since I'm casting the prototype normally. 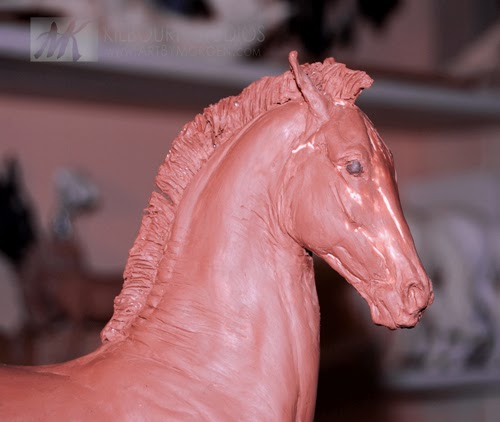 Later I added: Btw, this reads like I've done more sculpy horses than I have... only like.. 4 I think to completion now. I only started playing with it seriously last year.

Anyhow, after posting that this morning I painted the white exposed areas of the skull that will probably be "bone" right up until the end & am much happier with trying to work on the face now!

Stay tuned however for me to be truly frustrated when dealing with paint peeling as I use solvents to  smooth areas. ;) 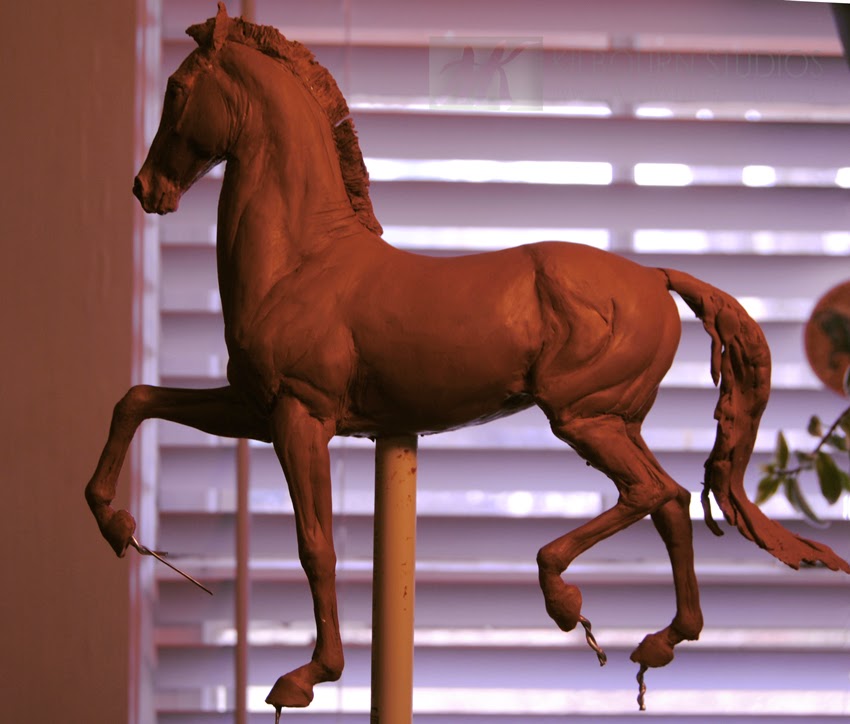 I have a long ways to go still. I'm quite unhappy with this right/off side.  So many thoughts but I'll let it gel for a while.

Anyhow, so there ya go. I was interrupted too many times but I will very much try to save some passage quotes to share from that book in upcoming posts.  In the meantime, it's available on Amazon I see!  I cannot vouche for which editions might contain all the conjecture & other works of the era though that talk about hoof shapes, and mane trimming styles.  Still, the one I show above does so check it out if you're into this sort of thing! :D 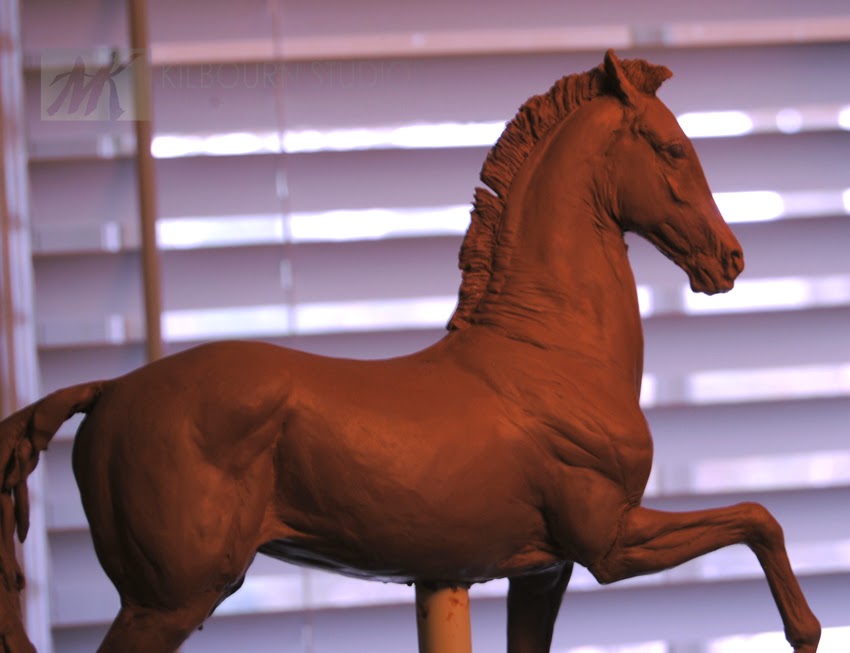