My old RESS fleabite 'how to' article 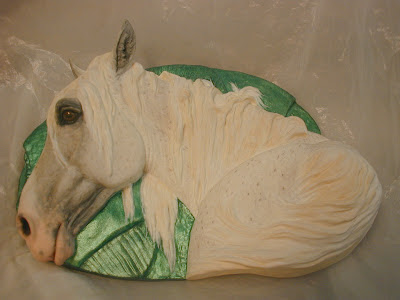 Someone was just asking about my old RESS (Realistic Equine Sculpture Society - no longer in existence sadly) :( technique booklet tutorial on fleabites... and I realized I might as well post it here for posterity! In creating the PDF from the 13mb file I really had to downgrade the photos to low quality jpgs so here are a few in color all purty too in case you want to click, enlarge & really see what I mean by blending the bites, up close and personal. Really, there's nothing to the technique except a light touch & a LOT of patience! 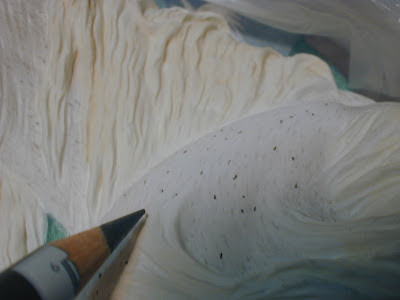 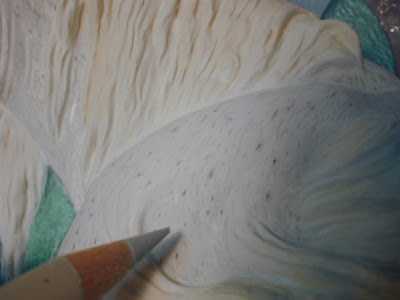 Posted by Morgen at 5:03 PM No comments:

Little more to add than sharing a few pictures here of my swimming mare.  She's 8" long nose tip to tail tip.. about 5 top to bottom, but she'll be magically suspended via a foot attachment to some sea flora so she'll be taller.  I want to get back in there but this is so folks may see finally what's literally been floating around in my head for some time now (ooph bad pun sorry!). ;)  So anyhow, I got a chance to start on her yesterday afternoon and this afternoon she really started to finally look a bit horse-like.   Here she is; 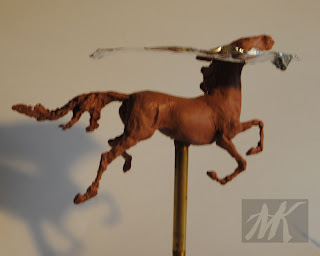 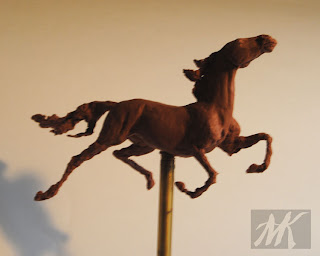 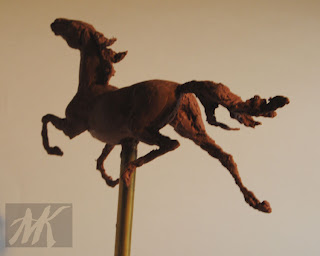 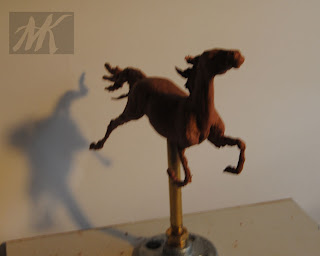 I could share more of my ideas for how she will "work" as a narrative when completed (or the various ways I am thinking of to offer her to customers) but I'd actually rather leave it as a surprise.  Still & all, I loves her.  I can nearly hear the gurgling underwater sound as I'm working away on her.   Her name begins with an "O".  It's probably not too hard to guess of course. ;)

So it seems like I really haven’t had deep thoughts to share more often than once a month here on the inner workings of my studio.  Truth be told many little things have gone on.  Shoot, BIG things too.  But this blog is more about the “journey” than anything else.

As such, I’ll summarize the month of July in the end but first I’d REALLY like to share a TED talk I keep coming across on the Sci channel and that moves me more & more each time I see it.  Moves and intrigues me.


So my friends here might remember that I once (5 years ago) posted about being an “Ambiturner” (tongue in cheek joke from the movie Zoolander where the term was used for people who can turn both left and right).  I was born ambidextrous.  My kindergarten teacher forced me to pick a side to write with so I chose left handed.  I think though that I’ve always been more right handed about many things.  Listening to Dr Taylor’s description of right brained activities is fascinating to me because it’s NOT a state I’m constantly dwelling in.  In fact the hard sciences were more my thing.. yet while the “global picture” hard science concepts were a cinch for me to grasp typically, linear 1, 2, 3 steps, terms etc still elude me.  Anyhow, but that’s not the aspect I find fascinating…  just a btw this is where I live sort of thing.

What fascinates me is how very very few of my artist friends like to listen to talking while they work.  Where as it’s my totally preferred state of working.  For me it’s as if I have to give my left brain something to do to get it out of the way so my right brain can really flourish and work.  Although the more I’ve thought about it the more I’ve come to realize that at times things that require some focus technically (ala left brain logic coming into play – such as measuring proportions), are when I stop hearing whatever it is I’m playing on the tape/cd.    So it really has been an interesting journey to find where/how I work most efficiently actually!

I won't even get into the synesthesia aspect of it for me much except to say that I do tend to insert mental "memory" points onto my sculptures too.  I return to a point in the mane per say & suddenly flash back to a point in the story I was listening to when I created it.  But that's a lot more complicated & probably could get it's own post.  The brain is so fascinating.  The games it plays on us are fascinating too! ;)

So in watching Dr Taylor’s talk last night again with my fiancé impressed me about a few things.  He’s my polar opposite, engineer.. highly methodical and thorough.  It was hysterical to watch him watch her talk about the whole magical exposure (for the first time?) to her euphoric states.  He must think I walk around in lala land (well ok, granted this isn’t so far from the truth a LOT.. many people who know me know this).. but also I was a bit surprised to realize that I missed the first time that she had this pretty severe stroke at the tender age of 37.  It’s really amazing that she recovered so thoroughly and just plain lived imo.  Humbling how much we can do with our brains and yet how fragile they are.

Anyhow, so of course I have to think too of how much like Dr Strangelove & the alien hand I can be with my 2 sides.  It rather cracks me up.  Just this past month I got this whole ribbing from my pals about being like this cartoon character (of course I have only seen 5 mins of this character in action) “Rainbow Dash” who is all serious and driven and scientific apparently.  Huh.  Meanwhile MY personal self image is of a seriously dippy girl who is barely staying on top of stuff and more often has a dorky expression going on…
(:-P

On that note, last month has been a wild time of much happening.  I’ve officially launched my new fine bone china line with my new pony’s arrival; http://www.artbymorgen.com/available_clinky_etc.htm  It’s been really exciting to share him with fine bone china collectors and he’s been very well received I think (I’m honored folks like him and the initial slots sold out in a few hours!). :)  In a week or two here I will offer him up at auction.  The glazes will each be unique/one-of-a-kind on my edition.  This is more costly to produce of course but OH so worth it imo since mini horses come in every color under the sun and this company, Horsing Around, has been producing the most amazing glazes lately.. even a non-collector like me has been sorely tempted to get one now & then.  Anyhow, their workmanship is phenomenal! 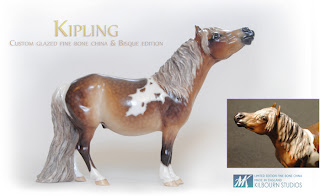 A week after Kipling’s release I loaded up a rental car and drove off to Lexington Kentucky again to set up a booth in the covered arena of the Kentucky Horse Park for Breyerfest.  I shared it with Maggie Bennett and she & a great helper (thank you Claire!) manned it while I taught 3 little sculpting workshops at the park that weekend. 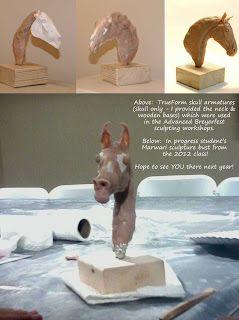 I was pretty pleased with how the workshops worked out, although I didn’t get to say/teach every little thing I wanted to (2 hrs each mind you!), everyone again seemed to leave with reasonably horse shaped objects.  The bust over the styrofoam skull armature above is from the advanced sculpting class.. I have to laugh a bit because it's misleading - many of my advanced students (including the gal who made this) had never sculpted before. I hope this encourages folks to sign up for next year.  It's a lot of fun talking both the serious stuff & tricks.  I’m starting to enjoy this notion of classes & workshops (one on one at least) and wanting to do more hands on teaching in a less hurried (2hr) setting.  I’ll probably hold another local class around me this winter and have new ideas on how to make it more productive and appealing for anyone.  In many ways I mostly want to share those ideas that make sculpting seem less mysterious… that whole nonsense that it’s only for the right brain artistic "elite" couldn't be farther from the truth most of the time (not with realistic sculpture anyhow). ;)  Lots of left brain technical stuff to start with gives you a great launching point to then spin off & get rather artsy airy fairy from, even in aiming for hyper-realism.  Left brain check points really bring it together too.

On a random side note, in sculpting (back to the left/right meanderings), I often sculpt upside down myself... a way to dismiss preconceptions and simply focus on what you are literally seeing.

Anyhow, back to last month's big event (not just for me but for everyone I hear) sales were great this year from within the Horse Park and from what I hear back at other venues.  I normally don’t talk much about that but I want people to know that perhaps we’re all seeing more optimism in buyers again...? Yay!  Spreading the hope baby!

OH!  And how could I forget that I finally got to show my newest (1:12 scale) sculpture “Nemo” there.  Details will be forthcoming on him, he’s literally getting his 2 alternative mane and tail options for Destriers by Design (a new company founded by Wendy Galbreath) right now.  In fact he’d be done already if I hadn’t gotten knocked down badly by a bit of a tummy thing this week and been grounded for 2 days. 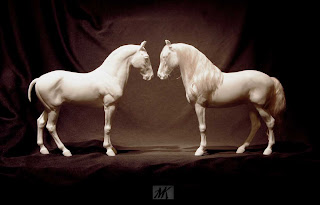 Righto, so that was far too short and sweet synopsis of nearly 30days but that was the gist of it.    Going forward I have some horses in the works I’m considering and some long overdue obligations to wrap up.   OH!  And in a few months I’ll have a whole new bunch of gorgeous shiny little fragile fine bone china ponies in a variety of utterly individual colors to share!  Cheers & hope folks are staying cool!!!
Posted by Morgen at 8:23 AM 5 comments: