I collect links to these but only just today found the key to downloading them (a website called Keep Vid).  Which I badly need because with satellite internet out here in the boonies, I get a daily allowance on my internet use.  Watching high-def videos IS possible.. rewatching them over and over (as a sculptor might be want to do for studying purposes!), is likely to get me in trouble for exceeding my daily limit & the reprimand of 24 hrs of super slow internet (they say 'dial up' slow but it's worse than that... you can't even get email at that point nearly).

SO, downloading is like the best thing since sliced bread.  I've been using video since Deputed Duke (so 2003) to really study what's happening in certain poses.  Its really key.  You can know all the anatomy you want to (and I had a couple of college courses where there was lots of it, comparative & straight up anatomy & physiology)... but understanding what happens as the leg takes on weight and various muscle groups come into play, and  HOW they look as they come into play in concert... this isn't something some hashed out schematics of muscling can tell us, and it varies so vastly with every pose, and nuances of poses where weight (build) and fitness of the horse come into play.

There are still times (but fewer and fewer!), when online videos just won't have what you're looking for though.. for example again with Duke and his half pass I really needed to see what happens to those shoulder muscles when the whole scapula swings inward some as the chest muscles pull it over.  It's not like the trot swing forward because of the new direction the leg is partially going in (the movement is equal parts forwards and sideways and can be done in very slow or pretty fast tempo).  I was making a pretty forward moving trot so the degree of reach sideways was  closer to what you might see at the Olympic level.  I videotaped the real horse doing it actually but he wasn't quite Olympic level mind you .. so I decided to go to Gladstone NJ and videotape WEG selection trials.  It was perfect.  I was able to stand on several sides of the ring and videotape a great # of types of horses and really see so many things I normally couldn't.    And thus discovered some muscling that surprised me.  So you tube isn't the end all be all in other words.

Why the sudden call for folk's favorite Slow-Mo video links?  Because I'll be teaching a class for the American Academy of Equine Art in less than 2 months and I'd like to compile some muscles/angles just as I did a decade ago.. except we now have the technology where people don't have to stand next to their VCRs for hours hitting

Well here is the info for the course. 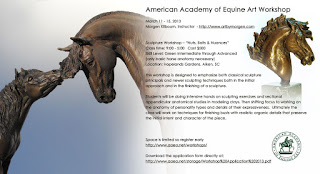 Make no mistake, the videos are something I want to hoard! I use them ALL the time still to be certain for things related to tricky details like points of shoulder, stifle and similar lumps and bumps that really have more complicated movement than can be rendered 3 dimensionally by a mere understanding of how the patella moves with the tibia for example.    I can have people feel the paddle of the scapula like an oar on a moving horse, swiveling as the horse walks (try it if you don't know what I mean, walk alongside a horse and feel the top of the shoulder blade).. it still isn't going to precisely make clear to you when to show such a detail as the scapula edge and when to bury it in muscle - at least not on a moving horse.  And there are some experiences I've been lucky enough to have, like feeling the stifles of a bucking horse, to feel the massive bulging lower edge of the femur,  and when that blob of muscle suddenly becomes a joint, that I don't recommend trying at home (it was a lameness thing the vet wanted me to try to keep an eye on & the young horse objected vehemently).  Still, video close ups with today's High Speed cameras are vastly safer AND allow for seeing things that you can NEVER get hands on understanding of;  high speed horses.

And with that I must get back to it.. I confess, I lost a link to one of my favorite videos of all time - 3 horses just playing in the paddock (warmbloods I think, bay & chestnut).. amazing amazing high def detail of their muscles and great tension as they tossed their heads and pranced.  I know one was being fondly remembered but I can't think of other keywords to help me find it again.  If you've seen it, PLEASE let me know.  I watched it a couple times and then got my internet use shut down for a day the last time I saw it.  Definitely one for the download folder to have & to study (and just to be inspired by!).

Here are nearly 20 videos from Oct  2009 that I formerly shared here;
http://mksculpt.blogspot.com/2009/10/video-archiving-here-today.html

Cheers and hope your 2013 year is off to a spectacular start!