Eek I let a whole month slip by here without posting a thing – oops! No good reason other than each time I've intended to update this, other things have come up & caused me to put it off for a day... until a whole string of days here really built up apparently. And now it's overload time as a result! 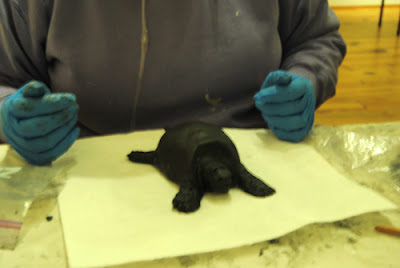 Well the part I’m most ashamed about is not giving a report (after mentioning it several times here) on my workshop. It went well! 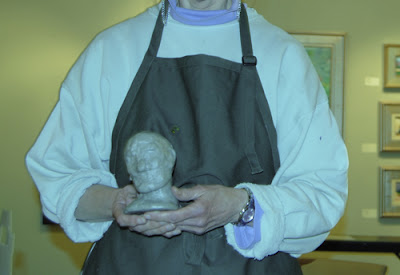 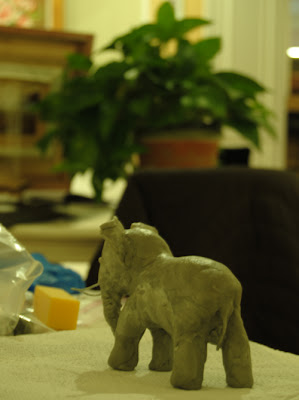 I’m always delighted by student’s enthusiasm. I would bet that most teachers I know (and most artists are I know are teachers), find this enthusiasm both inspiring and insightful.

At any rate, the class progressed better than I could of hoped in many respects – the students were able to dive in & take home animal-shaped objects & spare Apoxie sculpt to do more tweaking later on (yes, that 2nd photo is a human head bust - I allowed the human animal too). :)

I do have to confess that I was a little dismayed by my newest batch of Apoxie Sculpt procured for the occasion. It supposedly begins to cure in 2hrs time, I time tested 6 colors to be sure of this actually since it had been so long since I’d actually really paid attention… well suffice to say you should not just test the color but the specific container you’re using. The black cured on schedule but my brand new container of grey was exceptionally slow – taking 2-3x as long as it should really. So the take home for me was that a beginner class with a goal of taking home a ready-to-display work would be best if they could be 2 day events.

The entire class left me brimming with ideas too for my (far more challenging in terms of goals in a fraction of the time!) 2hr Breyer sculpting workshops this summer (I believe you'll be able to sign up for these in March). Primarily the Advanced class. I’m really hoping to make this as informative as possible so overcoming the serious drawbacks of limited time especially, and thus lack of certain prerequisite elements being in place, I have much to work out! Some of my fellow sculptors have given me some wonderful ideas here. I love a good challenge and at the very least, my hand out materials are bigger and better this year with more sculpting principals.

I also neglected to mention on the blog this past month that I put another of my horse head busts up for auction (editing to add in that link; http://www.ebay.com/itm/ws/eBayISAPI.dll?ViewItem&item=290670638045 ). I just shipped that out yesterday, it was one of my favorites so far – an aluminum one that really looked pewter. There was another aluminum one made to date but it’s MUCH lighter colored overall. Right now that lighter colored one is in Hollyhocks gallery.

There are other exciting things on the nearer horizon too. I hope to share soon… mmmmm daring to leak a little info I guess – clinky things! :)

Mostly though after the workshop was over and my writing was done. I came home with tons of inspiration & dove right back into my Criollo horse sculpture. I’m to the point now where I’m just tweaking little things here & there… they make a big difference though. Like yesterday I shaved a significant amount off of the tail. You can make a “full” looking tail far too clumpy very easily. So while I’m going for that “show stallion thick full groomed wavey hair” look… somehow in sculpture it can look like a large fat octopus has fixed itself to the horses rump (or human’s head to be honest) quite easily. Hair tendrils are a time honored challenge. I’ve taken different approaches with them in different sculptures. Different methods of sculpting them = different ways that paint lays into them. I do not like the texture-less look.. but I do try not to over texture too. That said, I liked Kipling’s the best for displaying “heavy hanks” of hair in clumps. And then Johann and Godiva (who’s manes and tails were show-ring groomed) have it for ease of painting imo.

AND speaking of Johann.... 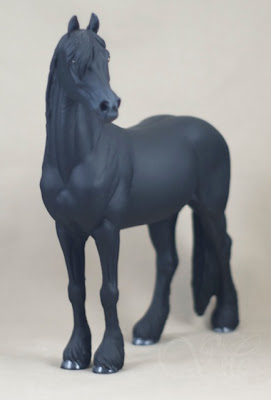 What finally prompted me to post today was this delightful custom by Sue Kern. Sue has a knack for coming up with very creative derivative (customizations) ideas. In this case I’ll confess I had sort of considered doing Johann in china as a Friesian like this… seeing her custom makes me think this idea for the future isn’t out of the question! It wouldn’t look quite like this of course but when sculpting Johann here I thought about all the offshoot breeds like that quite a bit! Anyhow, I’ll end with sharing this. Kudos to Sue and thanks to Gea – the proud owner! 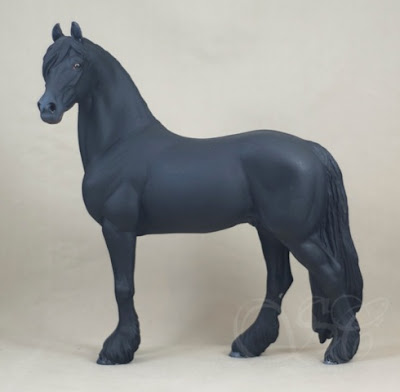 Hopefully my next update will be a lot sooner now. There is rubber & resin on it's way to me for the criollo. Now I probably will take a week or two after that to work out many details - one major one too is lengthening the back a little just a waste of energy to do on the armature stand - a waste AND possibly a big risk to the rest of the work. I did that big change with Kipling right after he was in resin prototype form & it was a few hour project - making a vast difference in the final impression. In part that is one reason people won't be seeing this Criollo until after that. In part because I simply want ALL the details, veins and whisker bumps, in place this time so most people (not my critique team but the public at large/customers who might be on the fence about him) see my whole "picture" completed. But ooooo I can't wait to share him! So stay tuned.. & with that (!) back to the grindstone!!
Posted by Morgen at 7:51 AM No comments: