(I am cross posting this everywhere from my lists to make sure no one misses out on the info)
Hi guys!
I need to confess that this took me about 20 tries to make .. aaaaand even then this final footage still had a lot of out-takes so that I had to splice it together a bit.. I’m just NOT very good at this yet!  Still, I really really wanted to show how the water collar works (and more importantly, how tight fitting it does NOT work for pulling it on & off!).. So I just really felt I should give some basic tips so that no one ruins their finishes – even though it’s nothing really very new.   This is just the same sort of common sense needed in making & putting on tack; You have to plan for where it will possibly rub and make sure the fit is roomy enough and not scratchy!  Hoping this video will better illustrate my recommendations.. so please bear with me through the follies of trying that!

Towards the end at least it gets a little better in focus (youtube is always tricky though too).. but at the very very least I hope  you also can see how strong the final seaweed and magnets are!  There was a LOT of collaboration with the caster too in order to make sure the seaweed was as thin as it could be BUT still be strong enough to hold her without sagging down over time (steel rods prevent that).  I also use stronger magnets in the real final castings than I did for the bronze demo casting in that last video.  NOTE THOUGH!  :D You won’t be able to stick her to your car, or garage door.. nor upside-down or anything too wild or radical, but I’ve gotten  a lot of questions there about how secure she is up there so hope it helps show their strength better too!  (No ponies were harmed in the making of this video)

I’d really like to also to add that.. (hangs head in mortification)…my voice is sooo flat and unenthusiastic after those 20 tries too…lol! No voiceover career likely here I’m afraid…! :)  BUT here’s to hoping it’s at least tolerable though and that I’m mostly audible (and make sense)!  Truly need to add thanks for everyone’s support and patience as well.  Most of the paid for Oceania castings should be mailed by the end of this week.   In fact I’ve got 10 completely done that were only waiting on this url for their supplemental tips in the accessory packets.  That’s how much I felt I really needed to have “how to” in video form!!!   & Without further ado, here we go!
___________________________
http://youtu.be/2gVYz7sbKE8
or
http://www.youtube.com/watch?v=2gVYz7sbKE8&feature=youtu.be

The gift of insight

It's not any particularly unique bereavement experience here but I'm constantly learning of things I wish I knew when my mother was alive.  She  passed away in 2011 and since then I've been receiving wonderful gifts from friends and family in the form of knowing her in ways I didn't as her child.

She was a sculptor.  I didn't know this.  You might laugh or be shocked to hear that but if you knew her you'd know how humble she was about her own artistic talent.  Her father was a sculptor, for a living he taught and sold art.  However she was a social worker who had always sworn to me that she had no artistic talent what so ever... even though I'd always envied (and tried to emulate) her abstract doodles she'd draw while on the phone (you know, back when phones used to be corded affairs that kept you chained to the wall).   ANYHOW,  I know I tried to convince her otherwise at times but I wish I'd had better ammo such as this.  Artists can be too hard on themselves and she certainly was.

So with little more commentary or fanfare, I'd just like to share with you something that arrived in the mail yesterday tha mom made around 35 years ago as a wedding gift for friends.  I didn't even know she dabbled in stone carving but I feel like I should've known.  Since I was out of diapers by then if I could stretch my memory maybe I could even remember her actually sculpting this.  Anyhow, the friend who gave me this gave me more than just a work of art. Thank you Emmitt.  You can't know what this means to me. 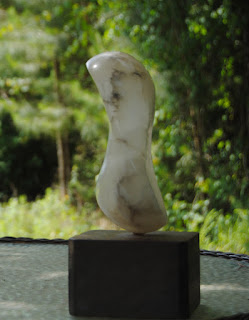 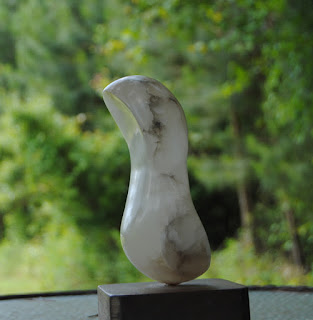 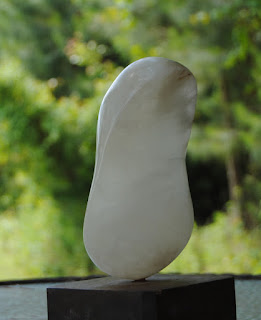 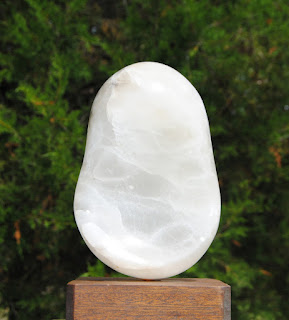 Things that shouldn't have worked! :)

First off - I always forget to mention it on my journalistic blog here but the swimming mare Oceania is now available to the public at large.   :)  Her page is here;
http://artbymorgen.com/oceania.htm


And now for more sneak peeks! 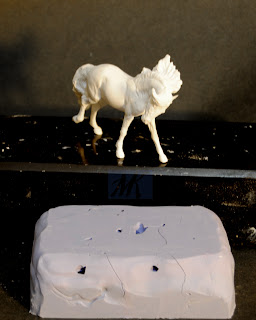 Today's discussion;  A molding method that kinda shouldn't have worked..!!!  I thought of diagramming this more but it's so simplistic that frankly the explanation might take more time than it did to make it... and really ->  I can NOT recommend this method!  It only worked here because of the 2 works in question had the right shape to make it so.  Their legs really should not have cast at all and honestly, the mule's leg didn't cast... I had just planned to use wire supports for him there anyhow (mules have small hooves), so it wasn't a biggie to have missing limbs!

As such, here are some updated pictures of my feisty liberty-act Andalusian and yet another "how NOT to do this" example. 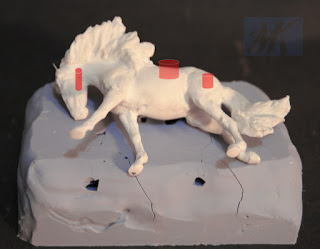 So what is going on here is that I put him in a small box - laying upside down to what I'm showing here.. in fact (duh!) I should've flipped this photo to the left so you can more easily see that.  ANYHOW, I laid him down with some clay I roughly rolled by hand and placed as shown (much more neatly) by the red cylinders.  These acted as "sprues".  I had one more on the tail i think too there.  Basically I was trying to make sure there were contact points with the bottom of the box (which becomes the top of the mold later on).

I really cannot believe it worked.  I poured the rubber over it all.. then pulled out the big blob the next day and  cut the horse out relatively easily!  The holes you see are where I decided to carve a couple more sprues.     Then where I was casting something else I poured the resin here too.. Using the largest hole as my pour-spout point(see first photo there - hole in the center), and again, holding fingers basically on the side w/the clay plugs, the thickness of the walls was enough to hold the resin in (I sort of held it together a tad bit tighter than is shown).

The goofiest part of this set up (probably spotted immediately by those who've molded anything) is those 2 extra sprues on the side.  I had to literally plug them with clay after they started pushing out resin because otherwise the level of the resin pour would have slowly leaked out the side at that point before it kicked.  Not the most sane approach but definitely simple enough.  I also held my fingers there so the clay didn't pop back out, but I was pretty sure my (SmoothOn 300) resin was gelling up at that point anyhow.

Truly the laziest whole horse mold I've ever done.  Clearly they were meant to be if it worked.

It's been a while since I've shown him here.. last year I think.  Anyhow, he needs more tweaking/leg refinements (I did fully replace one of his legs too as it broke when I was adjusting it.. very small!).  LOTS of tiny details still to come.  Overall though I'm happy enough (verses the state of the mules today), to share him.  Sooooo tada I guess! There you are.  I'm not sure how long it will be until I have time to wrap him up -> a LOT is going on here.

In fact the whole reason I cast these a bit prematurely from their clay state is that I didn't want to (a) deep pack them for shipping/storage in the summertime in their super soft clay state.. yes there are ways to unsure they are ok but honestly I had tried hard & soft clay approaches on the legs and decided that I'd be getting the best detail out of refinements to the resin hard copies.  (b) I was casting multiple molds for Oceania's water accessories (I am casting those myself), and it was easier to mix up just a bit more of this rubber and do it then & there rather than to calculate such small volumes (the ability to have excess and share it across a # of molds in other words). 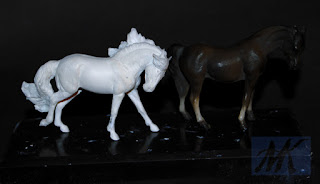 Above he is shown with one of the few Breyer Stablemates I have:  a 1:32 scale Maureen Love work.  Definitely shows how much more refinement he still needs but I thought it fun to show how he's one of my few TRUE 1:32 scale works. 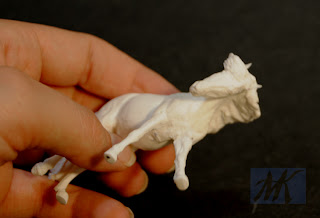 The undercut here of the mane was one reason I thought to try my crazy molding method.  I really can't explain it well - it's a 3D thing.. but it's a paaaain sometimes.  Suffice to say, a big "WHEW" that it worked out!

Below you can really see his feigned angry little head toss and flying mane.   It was inspired by the (many) types of fantastic and fantastical genera of entertainment such as the Cavalia shows. 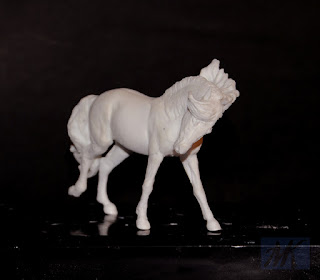 Btw, if you've never been to one of these types of shows I highly recommend it!  And at least check out some of the videos on the YouTube channel here; https://www.youtube.com/watch?v=YsXxYiaP2YM

They definitely aren't giving away all the magic though.  It's really quite inspiring & worth every penny to attend!


And that sums up what I've been playing with for new sculptures (sans showing the mules at least).  The mules are bigger - but 3 little guys.  More soon I hope! :D