I have been quiet - so sorry! I've been really working nose to the grindstone & hope to be able to share more soon of all that. Meanwhile, I had to take a little time to do some sketches & this watercolor for my dad. He turned 70 just after Father's Day. 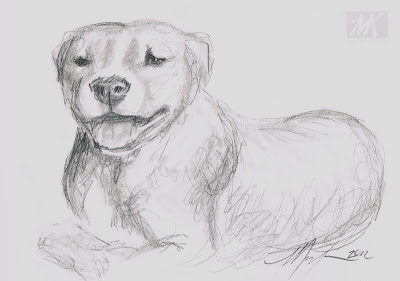 This is Taco, his late dog that I gave him in 1998. Taco was a rescue dog I'd picked up in college. He was great dog but when my other dog died he was hard to keep happy suddenly. Very suddenly. He took to howling from separation anxiety. So not being one to dump my problems BUT also realizing that my dad was ready finally for a new dog & Taco would be VERY happy in the boatyard sidekick lifestyle... I gave him to dad "temporarily". For several years dad would always say he was "just keeping him for me for a little while". Eventually that charade stopped though.

Taco was an AmStaff. I got him an ILP # from the AKC because I was going to have him temperament tested. CT had breed specific legislation (bs!) biases in many towns. Taco once got out of my backyard & the pound picked him up before I managed to find him... the word had been given to the dog warden that "there was a pitbull on the loose near the beach!" (pandemonium & people locking up their children).... Anyhow, he'd wandered into a neighbor's yard & was laying in the sun (ours was shady). That's how the dog warden found him. He told me "I knew he wasn't a pitbull from the moment I saw him because he was laying there sniffing flowers". So I'd jokingly call him Ferdinand sometimes. ;)

The boating community of the CT shoreline towns was a lot more fun for Taco though. He was able to live life mostly off leash. He was able to socialize with people who typically didn't run screaming & lock up their children. ;) He had a lot of people and animal friends.

Ironically the worst thing about it for him were these feral boatyard cats that would come up to him when he was sleeping and attack him. Going so far as to go inside dad's car to attack him while he'd be sleeping inside.. Poor persecuted little PB Taco.

Taco developed a large lump that doesn't quite show in the 2nd image here/watercolor. It came on around 9 or 10 or so. It started as the size of a flattened football... eventually (after 1 or 2 removals) the fatty tumor filled out alongside all his ribcage up to his spine. Ferdinand had become a true Quasimodo. Still he was so low key he just shuffled around sideways & stoically dealt with it. His elbow was pushed out almost 90degrees at the very end by his otherwise benign tumor.

I'm not sure what precisely was his final malady. He had a few. But pretty much Dad would call me & gravely inform me that it was probably going to be "time" in the next few days. And then more months would pass & he'd be plugging along.. I'd ask up after him & get these (it's an old man thing I think?) bowel reports and descriptions of every little morsel he'd eaten & how he liked/didn't like things. ;) Eventually a day did come where Taco really did seem to say "man this is no longer worth trying to do". It was one of those things where you don't feel any remorse, the animal really picked his time and went out with as much dignity and yet gratitude they could muster. Of course I expected Dad to cry all over the place but he didn't. Yet years later he'll talk about Taco (a lot - he still talks about him quite a bit!).. and he'll get choked up. It was a pretty easy decision to decide he needed Taco portraits for Father's Day & the very big Seven Zero.

So it's not my best work maybe but it's certainly "significant" to me as portraits go. The first pencil sketch up there is of Taco when I'd owned him for a few years already & he was finally putting on weight after a full year of needing a rice based diet due to being a stray with tummy issues.

This 2nd portrait is from a series of photos my dad took and gave to me one year. It still hangs in my bedroom. 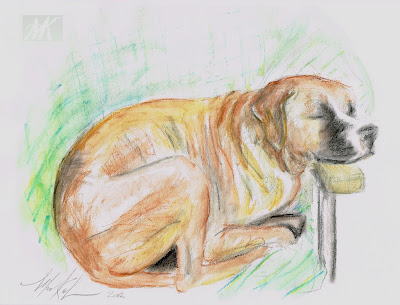 Both are approximately 4 x 6 in size.

I'm going to do some note cards of various things for sale in the local galleries I'm at & at a few in person events. Still not sure if I'm ever going to do the Etsy thing but along those lines. Taco is a "must have" for me in the "Dogs That I Have Loved" series. :)

Happy Birthday Dad! & Missing you Taco.
Posted by Morgen at 11:24 AM 2 comments: