It seems like the middle Friday of every month is when I like to get around to posting here!

This month isn't much different from last..  and looking back I see that it's been 2months since I posted - wow!  Ok, well quickly, I've gotten & shipped out most of the Pixel resins ordered to date.  Hoping that more arrive today actually even though they seem to have stalled in transit.  ACK!  (This is when tracking is frustrating!). ;)  Anyhow, I've been so pleased with the casters, they really outdid themselves on nice clean castings AND super speedy turnaround time.

Since I'm so close to wrapping up my next horse (mostly anyhow).. I am working in my head on a way to offer some incentive reward for those who buy Pixel now & then want the next guy too.  Generally I like to leave a longer time between editions to let people recover but I'm just TOO excited about this next guy:  Quartermeister! 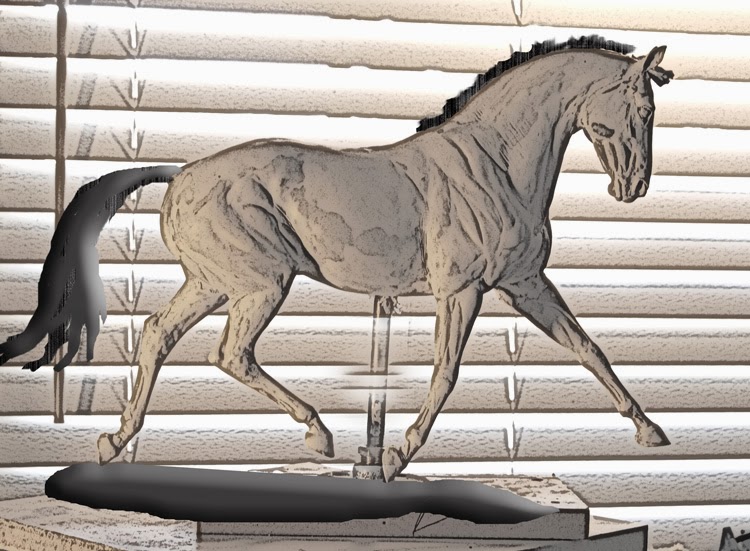 Here he is as of today, chilling out, getting his glamour shot test hairdo picture here in photoshop.  He's patchy looking still since I haven't primered him yet to make him more uniform.  I see I haven't discussed him on my blog so quickly;  he's a former sculpture of mine that was half-passing.  I took a wireless, hollowcast resin version of him cut into him from every direction until he was a humpty dumpty shell.  This was around 8 years ago.  I then pieced him back together to be trotting straight forward.  It required more than just removing a hind leg for example.  I removed it & cut it at every joint nearly to change the entire horse.  When I'm done I'll show some of the in-progress photos and a side by side comparison with the former horse.  They are NOT the same anymore.  Every inch and nook and cranny of this horse has been covered over or carved into.  I haven't found any points left of the original still showing... including even tendons which all need resculpting.

Basically though it sped things up in a major way for me:  proportioning and joint position along the length of legs, neck etc.  These things are a major time consumer in sculpting.  If I took a Breyer and wittled it down to sticks  & completely filled in every corner it would STILL take me less time than working off my own aluminum armature.   So here where I have roughly the same muscles in place for a haunch flexed forward in this position, well WOOT!  So much much less time to figure it all out from scratch & hundreds of photos.  NOW I get to do ONLY the fun stuff:  searching through photos to decide just how much fleshy flexed muscle mass is appropriate and artistically exciting for THIS horse.  In other words, it's all the fun stuff when the body underneath is roughly worked out for me.  GOOD TIMES!

Now if this wasn't my own sculpture originally though, I would have to concede that someone else's hard labor did more than half the battle here, even if I'm putting whole new layers of epoxie over everything. but fortunately it was my own labor from exactly a decade ago.  How fun to return to it and revamp every inch with a new mindset and armed with all sorts of cumulative experiences!

And with that, I should go & run to the PO and see if my package is here even though tracking says it's been sitting somewhere else for several days.. and then dive back into this fun adventure.  OH!  I meant to comment on the hair.  I plan to do a very short "ready to braid" trim that's loose.  I was initially thinking I should braid him up but truly, if the mane and forelock are lightweight and bouncing off the body it's easy enough for people to customize. ;)   I think it makes him look more manly though to have spiky hair! :D
Posted by Morgen at 9:48 AM 2 comments: