Ok, so this is hurried & for lack of anything better in AGES.. I’m so sorry to be so silent. I’ve been wrapping up a horse last month (& yes, I do believe he will be unveiled at Breyerfest, he’s casting now!)… and aside from that I’ve been amassing my own inventory to bring. I should be posting to my group/mailing list in a bit more on that. My first clinky is on his way to me as well & I do hope to unveil HIM as well at Breyerfest but he won’t be for sale then… I may take orders there. I need to really think how I’m going to approach that too so I’m just not ready to say yet.

Meanwhile, now for something completely unrelated & random!
I was looking for some close up photos here & came across something I’ve long known of via observation.. but oft not see done in horse art; FLOPPY TENDONS! Lol! 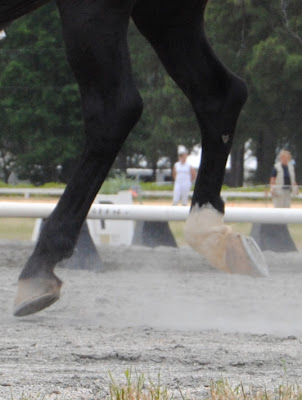 (my friends who know of my obsession/unexplained excitement in spotting this are just shaking their heads now)...
I think this is seen in older horses primarily but I know I've seen it on some young or at least middle aged (not in their 20s) jumpers etc as well. You can of course feel the softness when you pick up a leg but to see the tucked hoof deflection in action (occasionally) is just so .. interesting. Akin to my floppy arms I suppose now.. lol! Anyhow, that’s all. A photo of my own that clearly demonstrates it as a TRULY random non sequitur moment in lieu of anything really useful here. ;) 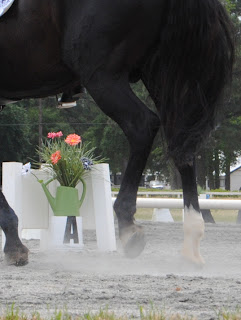 Just to be clear - this is a perfectly normal healthy horse.  I realized people might not have understood in my haste. The tendon flop :D is just what happens with flexion sometimes.  That is all (his legs are fine & don't normally look like that - the above picture taken a stride later). :)
Posted by Morgen at 3:31 PM 2 comments: